Accountability to fulfilling the right to education

The United Nations Education, Scientific and Cultural Organization (UNESCO) just released the 2017/18 Global Education Monitoring (GEM) Report. GEM Report CoverAt RESULTS Educational Fund, we are pleased by the report’s recognition and call for further fulfillment of the right to education.

Cross-posted from the GEM Report blog. 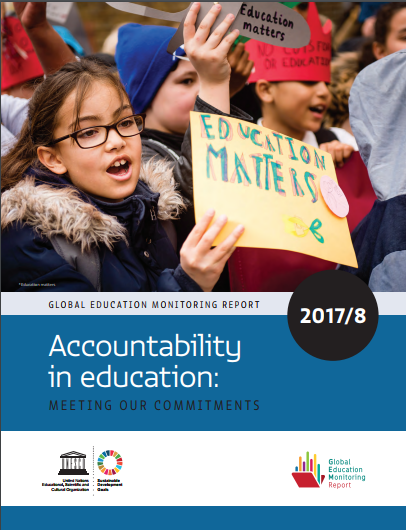 At RESULTS Educational Fund, we are pleased by the report’s recognition and call for further fulfillment of the right to education. The Right to Education Index (RTEI) is one tool to help fulfill this call by focusing on national accountability, civil society engagement, and equitable distribution of rights fulfillment worldwide. RTEI is an action research project that includes civil society-led data collection in the RTEI Questionnaire and a year of education advocacy using findings for national campaigns. In 2016, 15 civil society organizations collected data and in 2017, five were further supported by RESULTS Educational Fund to conduct national advocacy campaigns on pressing context-specific issues. RTEI 2016 findings and 2017 campaign outcomes can support understanding of how the GEM Report’s ambitious calls for accountability are enacted and enhanced by education advocates and civil society worldwide.

The report highlighted that only 55 percent of countries have a judiciable right to education, where citizens can take the government to court for violating their right to education. However, accountability is not merely citizen-led, nor should it fall on the citizenry to always hold the government to account. The report highlights how the government has a top-down obligation to be accountable to citizens in regards to broad and multifaceted issues, such as transparent and credible education planning and budgeting; national regulations that are equitably applied around registration, accreditation, class sizes, bidding and contracting, and private schooling, among other topics; alternative school motivators beyond testing and school choice programs; and ensuring that data collection helps improve learning. Applying broad definitions of accountability to the right to education, RTEI findings highlight how legislation, learning outcomes, and practices interact.

For instance, RTEI partner HakiElimu in Tanzania engaged 31 Members of Parliament and the Shadow Minister of Education on education budgeting drawing on their RTEI findings, especially around improving learning and teaching for girls, and specifically ensuring that teen mothers are able to stay in school or reenter schooling. The Minister of Education and other officials reported that they were preparing government guidelines on the issue. However, one month after the Minister's clarification in Parliament, the President closed the debate. This exemplifies how policymakers successfully engaged in dialogue with civil society but that challenges to government accountability remain.

The GEM Report specifically identifies the role of “informal checks and balances” to hold governments accountable for their obligations to fulfill the right to education. This includes “the voice of the public, CSOs, academic institutions and the media” as opposed to formal checks and balances that include “role of the legislature, the judiciary, autonomous institutions, human rights commissions […], preparation of plans and regulations, audits, monitoring and evaluation.” RTEI partners who conducted advocacy campaigns in 2017 highlight how their work falls within both informal and formal systems. For instance, the EducationCoalition of Zimbabwe (ECOZI) conducted consultations with 31 teachers from different teacher unions, civil society representatives, and the Ministry of Primary and Secondary Education to discuss policy recommendations to eliminate the use of corporal punishment in schools. ECOZI also presented findings regarding discipline to 200,000 listeners on a radio talk show. Although they used informal mechanisms such as consultations and media, ECOZI also appealed to the Ministry’s formal mechanisms by requesting meetings with the Ministry of Primary and Secondary Education. Tellingly, the Ministry hesitated to participate when they were engaged in the 2017 project but informal mechanisms proved more influential in scope and reach. ECOZI’s work, drawing on their RTEI findings, shows how civil society engages in both formal and informal accountability mechanisms and highlights that while citizens can call for accountability, the government is responsible for answering those calls. 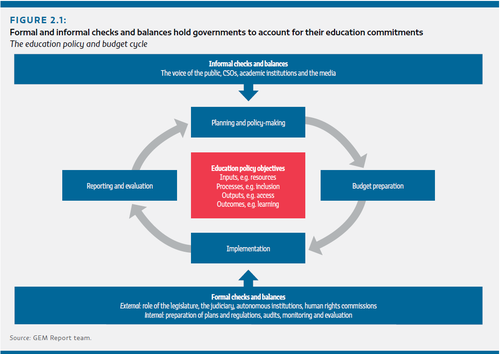 The GEM Report focuses on the right to inclusive education and further identifies approaches as falling on a formal to informal spectrum. The report divides accountability as judicial, administrative, and social, the last of which it delegates to civil society monitoring.

The GEM Report extensively focuses on the right to education and further exploration of topics, particularly international legal accountability and government-led accountability mechanisms. This short response and summary presents examples of right to education accountability derived from RTEI and led by civil society. As an accountability initiative, RTEI is one tool that draws on many strategies defined in the GEM Report. The recommendations of the GEM, were they embraced and acted upon by policymakers and government officials, could mitigate advocacy challenges identified in the examples here and support civil society to continue to hold governments to their national and international obligations.